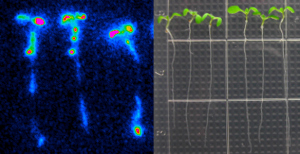 The structure and function of the animal ATP receptor is well-characterized, and the importance of extracellular ATP as a signaling molecule in pain and other physiological processes is well-established. But, until now, the plant counterpart of the ATP receptor has been elusive. In a paper out in the journal Science, researchers say they have found the plant ATP receptor. “We are just starting on what we hope will be a very exciting future for studies of extracellular ATP signaling in plants,” says the corresponding author, Gary Stacey at University of Missouri.

Stacey, an ASBMB member, and colleagues worked on plant ectoapyrases, which are enzymes that hydrolyze ATP. Ectoapyrase’s catalytic domain is outside the membrane, which indicates that “ATP must be outside of the cell in order for the enzyme to find its substrate,” says Stacey. “Therefore, it was logical for us to look for extracellular ATP, which was well-documented in animals, but not so in plants. When we found extracellular ATP in plants, it was an obvious next step to look for the receptor.”

That was easier said than done. A search for proteins that resembled the animal ATP receptor in sequence was unsuccessful. A biochemical approach, in which ATP would be used as bait to pull out the receptor, would have been difficult to do because so many proteins bind ATP. “Past work had shown that ATP induced a calcium response,” says Stacey.

So he and his colleagues decided to use the calcium response as the screen in mutated forms of Arabidopsis thaliana, the model organism for plants. When the investigators didn’t see a calcium response in a mutated plant, they knew they had found a candidate receptor of extracellular ATP.

The team named the receptor “Does Not Respond to Nucleotides,” or DORN for short. Stacey says he was the one who suggested DORN, but at first the enthusiasm for the name was lukewarm. “However, when I was told that DORN sounded phonetically like the Korean word for ‘money’ ¾ actually “don” but apparently pronounced closer to “dorn” ¾ that sold me,” he says. “Note that the first author is Korean, and we do get some funding for this project through Korean collaborators. He adds that they also refer to the receptor as P2K, because the name matches the convention set in the purinergenic receptor community.

The investigators performed additional analyses to confirm that they did have the plant receptor for extracellular ATP. One analysis they did restored the normal function of the receptor to mutated plants. With the receptors functioning again, the plants were able to recover from physical wounding, suggesting that extracellular ATP in plants may be important in stress resistance.

Stacey says the team still has to work out the structure of the receptor and identify any potential coreceptors. They also would like to search for the equivalent receptors in crop plants. Stacey says he anticipates the work to have an important impact down the road. “We have filed a patent on this work and can envision potential commercial applications,” he says.

Link to the Science paper