The secret of the legume: Bond Life Sciences Center researchers pinpoint how some plants fix nitrogen while others do not

The secret of the legume: Bond Life Sciences Center researchers pinpoint how some plants fix nitrogen while others do not (By Roger Meissen) 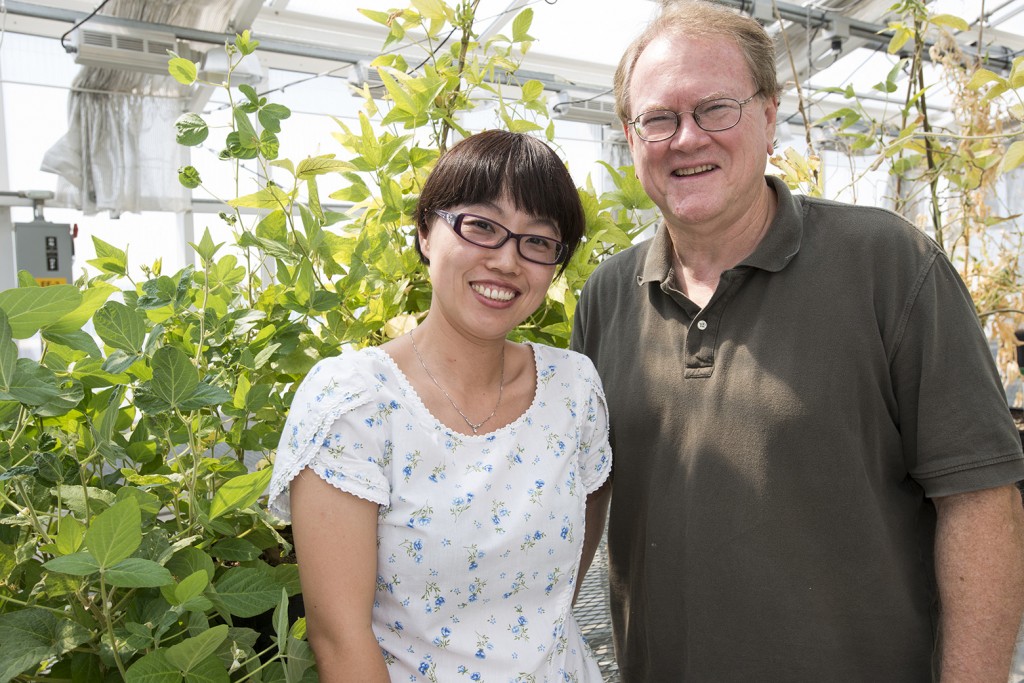 Yan Liang and Gary Stacey research the symbiosis between legumes, like these soybeans, and nitrogen-fixing bacteria at the Bond Life Sciences Center

A silent partnership exists deep in the roots of legumes.

In small, bump-like nodules on roots in crops like soybeans and alfalfa, rhizobia bacteria thrive, receiving food from these plants and, in turn, producing the nitrogen that most plants need to grow green and healthy.

Scientists have wondered for years exactly how this mutually beneficial relationship works. Understanding it could be the first step toward engineering other crops to use less nitrogen, benefitting both the bottom line and the environment.

“Our work uniquely shows that all flowering plants, not just legumes, actually do recognize the chemical signal given off by rhizobia bacteria,” said Gary Stacey, Bond LSC investigator and plant sciences professor.

His lab identified the most likely receptor for this chemical and showed that the signal suppresses the plant immune response, which normally protects plants from pathogens. This allows rhizobia a better chance to infect and live inside the plant.

Since plants can’t walk around to explore or avoid danger, receptors in cells of each plant act as its eyes and ears. They gather information about insects, bacteria and other threats and stresses from chemicals. These signals allow the plant to respond and adapt to its environment, such as resisting stresses like drought and infection by pathogens.

With rhizobia, the bacteria produce lipo-chitin, a sugar polymer with a fatty acid attached. This molecule is similar to chitin normally found in the cell walls of fungi, the exoskeletons of crustacea or insects.

Legumes, such as soybean, sense this signal – called a NOD factor since it triggers nodulation – and create the nodules where the bacteria fix atmospheric nitrogen into the soil.

That doesn’t happen in other plants.

Scientists once gravitated toward thinking that non-legumes, which are not infected by rhizobia, just weren’t capable of receiving the NOD factor signal. But, a less popular theory guessed that plants like corn do receive the NOD factor signal but interpret it differently or have a problem with the mechanistic pathway.

Stacey said figuring out which is happening is like fixing a motion-detecting light.

“If you walk into a room and the light doesn’t turn on, either the motion detector is broken or there’s a breakdown of the electrical circuit between the detector and the light bulb,” Stacey said. “The analogy in a corn plant would be that it either doesn’t recognize the signal or recognizes the signal but lacks the ability to couple it with downstream developmental effects.”

Stacey’s lab set out to determine which was true.

Corn, soybean, tomato and Arabidopsis were treated with bacterial flagellin, a protein known to cause a strong immune response, and also received doses of the NOD factor. These represent a diverse spectrum of plants to ensure the results were wide ranging. Results showed the NOD factor suppressed the immune response by 60 percent.

“After these results, what allowed us to take the next step forward is that we were able to make mutant plants with changes in what we think is the receptor for the NOD factor,” Stacey said. “That step showed that when plants lack the ability to recognize the NOD factor, you don’t see the suppression of the immune system.”

Since all plants seem to respond to the NOD factor, scientists think this immunity suppression ability could be evolutionarily ancient and part of how rhizobia bacteria changed from foe to a symbiotic partner.

“There’s this back and forth battle between a plant and a pathogen,” said Yan Liang, an MU post doc in Stacey’s lab. “Rhizobia eventually developed this chemical to inhibit the defense response and make the plant recognize it as a friend.”

A future in the field

Nitrogen has both an environmental impact and high price tag.

Fossil fuels are combined with nitrogen from the atmosphere to create the fertilizer.

When applied to fields, the excess fertilizer also ends up in rivers and streams, contributing to nitrification and hypoxia in waterways.

“The dead zone in the Gulf of Mexico is generally attributed to agricultural runoff and producing nitrogen fertilizer increases dependence on fossil fuels,” Stacey said.  U.S. farms used almost 13 million tons in 2011, according to the USDA, with almost half of it being applied to corn. Nitrogen prices ranged from $400-$850 per ton in the U.S. in 2013.

Nitrogen fixed in the soil by rhizobia is the closest thing to a free lunch a plant can get. For farmers, that’s one less input needed and is part of why legumes remain a staple of crop rotations.

In 2012, the Bill & Melinda Gates Foundation donated $10 million to the John Innes Center in Norwich, United Kingdom, to study and develop symbiotic relationships between bacteria and cereal crops, most notably corn. It hopes to bolster subsistence farming in Africa through the five-year project.

While it’s a long way off, Stacey’s research is another step to improving crops.

“Since the discovery in 1888 of this nitrogen-fixing symbiosis between this bacteria and plants like soybean, the dream has always been to transfer this technology into other plants like corn, wheat or rice,” Stacey said. “Once we understand exactly what’s mechanistically unique in a legume, then we hope to be able to transfer that trait into corn many years down the road.”