It would not be hard to understand why Homecoming at the University of Missouri may have an extra special meaning to Hli, Yia and See Yang. 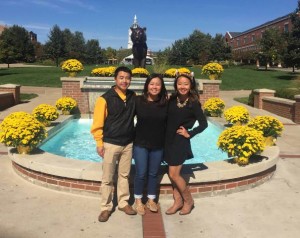 As first-generation Americans and college students they share a common bond not only through their Mizzou pride but also through the embedded core values of family, hard work and agriculture that helped lead their family to find a new home in America.

Their parents, Chao and Toua Yang, came to the United States in 1992 when their first child, See, was two years old and her little brother, Yeng, was only a couple months old. The Yangs, former refugees of the Vietnam War, left their family, friends and the farming life behind in Laos in pursuit of better opportunity for See, Yeng and the four children that would later be born in the United States.

“Growing up I always spent time with my siblings, and back then I really didn’t know what my parents were doing, but now I do — they were working so hard to save up so they could give us a better life,” Hli said.

The family originally moved to Wisconsin where they worked blue collar jobs. The Yangs dreamed of raising several children on a farm, and when they had saved up enough money, they purchased a poultry farm in Wheaton, Mo., where the parents returned to their agricultural roots and continued to show their children the true meaning of hard work.

“When they first came to America, they did not have anything,” Yia said. “They started off with jobs like picking strawberries that were way below minimum wage, and now we have a pretty large-scale farm operation. So I would say that they are really hard working.”

Hli recalled the story of her dad rationing his earnings when he first came to the states. Her father would split $20 in various ways to afford a week’s worth of gas, water and food. The sacrifices her parents made to pave the way for better opportunities for their children taught Hli and her siblings the kind of ambition necessary to succeed in life.

“Everything about them, like their struggles and their hard work, I think that’s had a big impact on my siblings and me,” Hli said. “We were raised to understand just how hard success is and how hard you have to work for it. You don’t just get things handed to you.”

The Yangs have six children: See, Yeng, Chee, Hli, Yia and Meng. All of their children, aside from the Meng, 17, who still attends high school, are in pursuit of their career goals. See, 25, is a CAFNR alumna and attends law school at the University of Arkansas. Hli, 20, and Yia, 19, are CAFNR undergraduate students. Hli is a junior studying science and agricultural journalism; Yia is a sophomore in plant sciences. Yeng, 23, is in the Air Force, and Chee, 22, attends nursing school at Missouri Southern State University in Joplin, Mo.

Life on the farm had a profound impact on three of their children, who decided to attend programs within the University of Missouri’s College of Agriculture, Food and Natural Resources. See, Hli and Yia became involved in the Future Farmers of America at their high school where all of them held officer positions at the district level. After becoming Mizzou Tigers, the siblings became involved in CAFNR student organizations and now pursue career goals in agriculture.

It was See, the oldest sibling, who first became involved in FFA and other high school organizations, and was the first to attend school at Mizzou. See is also a former member of the CAFNR Ambassadors, a student group promoting the College, where Hli is now co-director and Yia is a member. Hli said her sister’s example had a profound impact on the performance of her and her siblings.

“See is very driven. She is always wanting to better her life and the lives of others. She is a very big family person, too. She loves coming home and seeing all of us. I honestly think that if she wouldn’t have joined FFA, we wouldn’t have joined. We have followed each other’s footsteps, and she is the one who led the way… She set the bar really high for the rest of us.”

While visiting See in Columbia on various family visits over the years, Yia became exposed to Mizzou and the opportunities available. Although schools like the University of Arkansas and Oklahoma State University were closer to his home, Yia had developed a strong connection the programs available at CAFNR. Without this insider knowledge provided by See’s experience at Mizzou, Yia probably would not have made the decision to attend school at MU.

“See is the big reason why the rest of us are where we are today,” Yia said. “She’s the oldest, and the first one to go to college. Probably without her coming to University of Missouri and being so involved in CAFNR, I don’t think I would have made the decision to come here.”

A network of support

In addition to being co-director of CAFNR Ambassadors, Hli was involved in CAFNR Student Council during her first two years at Mizzou. She wants to become a voice for agriculture in the media after she graduates. She has worked at KOMU and interned for RFT-TV and Farm Journal Media.

See and Hli developed a closer relationship with one another while living together during See’s last year at Mizzou, despite their five-year age difference. See enjoyed playing the role as confidant for Hli and watching her grow.

“We have a very close relationship,” See said. “Hli is a very ambitious girl, and I see a lot of myself in her. I am so amazed at what she does in ag journalism. I’ve seen some of her video productions and I’m impressed by how well she’s mastered all the programs.”

For Yia, it comforts him to know that his sister always has his back here at the University.

“Hli is a very caring sister,” Yia said. “I lived with her for the first semester of college. And I know she would do anything for me. If I ever need anything, I just give her a call. She plays that big sister role since it’s only me and her here at the university.”

Yia plans to attend graduate school after he graduates and wants to pursue a Ph.D. in plant sciences. Yia is also a member of CAFNR Ambassadors and is a member of the Alpha Gamma Rho fraternity.

“I’m really happy that Yia’s found his own way and am impressed by the way he excels at everything he does,” See said. “It makes me happy to see him shine so bright.”

Although Hli and Yia often butt heads because they have similar and competitive personalities, they enjoy working with one another in CAFNR Ambassadors.

“Because we are in CAFNR Ambassadors together, I see him once a week, at least. And I think that’s a really good thing,” Hli said. “Being in an organization with him, I get to see him and catch up with him… We both get to see each other mature, which is really funny.”

With her family more than four hours away in southern-most Missouri, Hli is relieved to have at least one sibling close throughout her time at Mizzou.

“It’s nice to have at least one close family member around here, especially because everyone else is four hours away,” Hli said. “Whenever I need things to be taken care of, I go to him. I rely on him, and I know he hates it, but he’s my family.”

The Mizzou experience has created a closer bond between the three Yang siblings. Whenever Yia and Hli struggle with homework or other issues, they are able to go to See or one another for help.

“The three of us having shared that same Mizzou experience and it has elevated our relationship,” See said. “I’ve already taken a lot of the same classes they are taking now and have been involved with the same organizations. They can come to me and I’m able to give them valuable advice because I’ve been in their shoes before.”