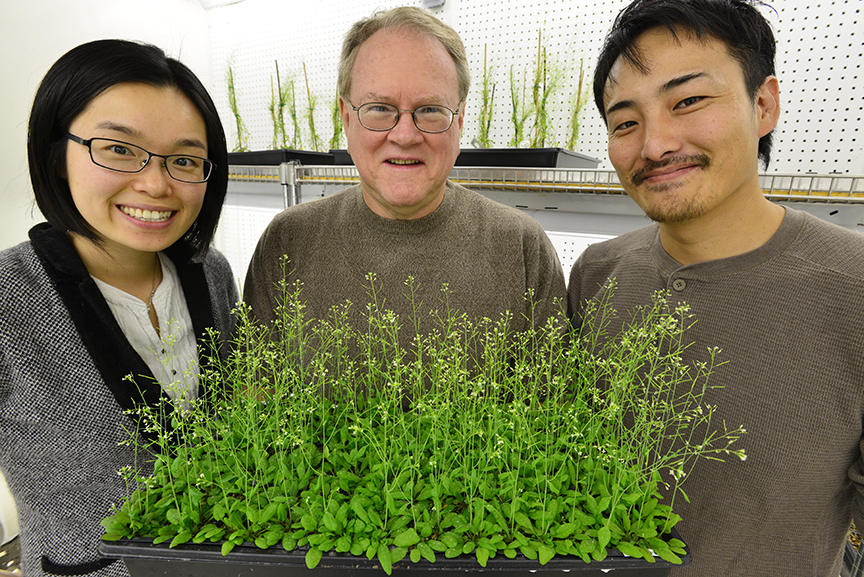 COLUMBIA — MU researchers have discovered that humans and plants respond to stress in similar ways, which could help scientists develop plants more resistant to stress that could lead to better crop yields.

“ATP is the currency of the cell,” Stacey said.

The newly-discovered protein, referred to as P2K, is a receptor, meaning that it lives on the surface of cells and interacts with outside chemical signals.

While ATP has long been known to be involved in reactions that require energy, the discovery and study of P2K has provided evidence that ATP plays an additional role in stress response signalling.

With the help of ATP and receptors like P2K, plants are able to recognize when they are under stress and can begin repair and/or start mounting defenses against the thing that’s causing them stress, such as a pathogen or insect, Stacey said.

“We believe ATP is the hidden stress signal,” Stacey said.

Considering that stress from insects, pathogens and extreme weather are a major impediment to high crop yield, Stacey said that he believes the research could lead to development of more stress-resistant crops which in turn could lead to better yields.

Stacey said the research is still in its early stages but, he hopes to move on to studying similar receptors in crop plants in the future.

“When you cut your hand, the tissue around your cut gets red, and then after a while the cut will heal,” he said. “That redness is part of the so-called inflammatory response and is, in part, due to the release of extra-cellular ATP.”

Research on ATP found outside cells was initially met with skepticism, Stacey said, because people could not understand why cells would ever release such a vital source of energy.

“It’s like you’re taking dollar bills and just throwing them around, you know, it just didn’t make a lot of sense to people,” Stacey said.

After the first ATP receptors in animals were identified and cloned in the early 1990s, skepticism diminished and there was a huge expansion in ATP research, Stacey said, noting that there are now hundreds of lab studies in the field. He said he hopes that the researchers’ success in cloning the first plant ATP receptor will help dispel similar skepticism within the plant field.

“Just like in the nineties when the first receptors were cloned in animals, we think we’ve cloned an ATP receptor in plants that will make people think differently,” Stacey said.