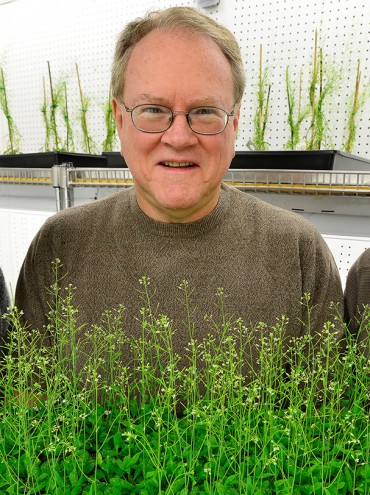 Science and invention are both about discovering the possibilities in something.

Those possibilities can create something new that improves the lives of people and advances our understanding of the world.

It’s no surprise that Gary Stacey, a Bond Life Sciences Center primary investigator, is being recognized this year as one of 148 academic fellows by the National Academy of Inventors.

“I am very proud to welcome another class of outstanding NAI Fellows, whose collective achievements have helped shape the future and who each day work to improve our world,” said Paul R. Sanberg, President of the NAI. “Each of these new NAI Fellows embodies the Academy’s mission through their dedication, creativity, and inventive spirit. I look forward to working collaboratively with the new NAI Fellows in growing a global culture of innovation.”

Stacey has spent years focused on the basic science behind biological phenomena including the relationship between bacteria and the roots of nitrogen-fixing plants. His work has explored the specifics of how plants can benefit from interacting with particular bacterium like Bradyrhizobium japonicum.

“This bacterium infects the roots of soybean and established a beneficial, nitrogen-fixing symbiosis,” said Stacey, a Curators’ Distinguished Professor of Plant Science in MU’s College of Agriculture, Food and Natural Resources. “The two patents that describe these discoveries formed the basis for the Optimize product, which is now sold by Novozymes.”

When seeds of soybeans or other legumes are treated with Optimize, it encourages what’s natural by giving the future plant the opportunity to build a beneficial relationship with the bacterium. The bacterium infects the roots and creates nodules that “fix” atmospheric nitrogen, providing food for the plant that replaces some need for fertilizer. This improves plant growth and yield in an environmentally-friendly way and leaves us in a better position to feed the world in a sustainable fashion.

While his research has a significant potential economic plus side, Stacey points out that understanding the basic mechanisms underpinning how these plants and bacteria interact.

“Our goals are not to develop intellectual property or products, however, we remain cognizant of any possible applications of our research,” he said. “Beyond the exhilaration of making a basic discovery, it is also gratifying when you see the result of your labors being put to practical use as things move from discovery, through translation to ultimate application. I have been lucky in my career to be able to traverse this full spectrum of research.”

A natural curiosity connects the diverse scientists behind discoveries. That trait started young for Stacey.

“You could see signs of this when I was a small boy constantly turning over rocks just to see what was underneath. In a way, with my research, I continue to ‘turn over rocks’ for the sole purpose of just knowing what is hidden below,” Stacey said. “Although I must on many occasions justify my research in the context of impact or application, the truth is I do science for the sole purpose of satisfying my curiosity, and studies have confirmed that curiosity-driven research is the most effective at making major discoveries and exhibits a much higher return on investment.”

With 13 patents to his name, Stacey’s curiosity has allowed his science to thrive at MU.

“A research lab at a major university is really equivalent to a small business — with 20 employees my lab would qualify in the upper 50 percent of all small businesses in Missouri — and I encounter many of the same issues that any small business would have,” Stacey said. “I relish the challenge of being a scientist in which you are tested in so many ways…as an innovator, organizer, manager, communicator, and entrepreneur.”

Election to NAI Fellow status is the highest professional distinction accorded solely to academic inventors who have demonstrated a prolific spirit of innovation in creating or facilitating outstanding inventions that have made a tangible impact on quality of life, economic development and the welfare of society. There are now over 1,000 NAI Fellows, representing more than 250 research universities and government and non-profit research institutes. The 2018 Fellows are named inventors on nearly 4,000 issued U.S. patents.

About the National Academy of Inventors
The National Academy of Inventors is a member organization comprising U.S. and international universities, and governmental and non-profit research institutes, with over 4,000 individual inventor members and Fellows spanning more than 250 institutions worldwide. It was founded in 2010 at the University of South Florida to recognize and encourage inventors with patents issued from the U.S. Patent and Trademark Office, enhance the visibility of academic technology and innovation, encourage the disclosure of intellectual property, educate and mentor innovative students, and translate the inventions of its members to benefit society. The NAI publishes the multidisciplinary journal, Technology & Innovation. www.academyofinventors.org

The 2018 NAI Fellows will be highlighted with a full page announcement in the Jan. 25, 2019 issue of The Chronicle of Higher Education and in upcoming issues of Technology & Innovation.